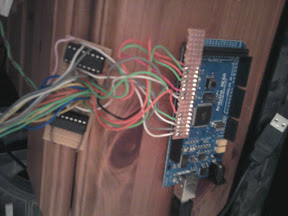 The H-Bridges arrived and I almost missed my dinner due to trying to wire them up with my solderless prototyping board. After the initial frenzy I realised that to do anything real with this stuff I'm going to have to make it work without sticking wires into arduinos and actuall make a half shield for it....
That done (and that was a lot of work as I have virtually no experience in doing that amount of soldering on a small board) I took out the drill style head and replaced it with a pen grip. Thought that it might be better to start with. Anyway, after some initial playing around (and realising that when you code a controller to take int based positions and ignore any decimal
points it thinks that your small numbers are really really large) I got it to draw a circle, and a square from python (via the serial library that comes with python), and even hand-held it through drawing an 'F'.
The tolerances for lego are terrible due to the flexibility of the plastic, but it does perform the same operation over and over with little reproduction error. The square was run three times in total and doesn't look like it's been "widened" by going over a number of times.
The F shows why it's not great though, the top bar is almost diagonal, even though the motors were told to go straight, that's all due to the bendyness of the structure holding the Z axis. 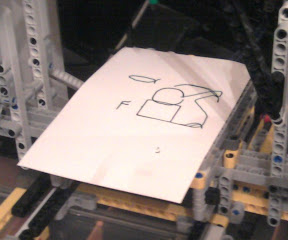