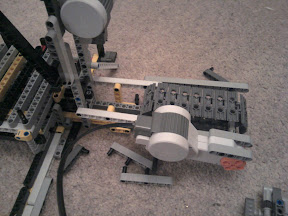 After trying cables, first building it like a draftsmans drawing board (the criss-cross at the back design), and then more linearly with two loops, first with kevlar thread, then with cotton, I tried tracks (which you can see pictured). Two more failed attempts later, I finally gave up trying to get rid of the backlash in the Lego machine.
It's never going to be a full scale machining CNC made out of the parts I have, but, I can make one that has limited backlash by using the linear actuators that came with my digger (set 8294).
Now, with these actuators, I can't move the table as far, but it does have very limited backlash.
Also, now I have done this, why didn't I know about THESE!?
Anyway, here is a video of it in motion. About time I hear you say. Well, the next step is no longer Lego. I've got annoyed with the limitations and I went and ordered some bits. Next update will reveal more, but just one clue...
Posted by fabs(); at 03:08